Check out our feature requests

This is the third release of the version 22 release cycle. Version 22 will be "finalized" in the December long-term support version release.

More details in the Changelog (opens new window). Notable new or breaking features, and what to upgrade...

Sanic server has been overhauled to provide more consistency and flexbility in how it operates. More details about the motivations are outlined in PR #2499 (opens new window) and discussed in a live stream discussion held on YouTube (opens new window).

This does NOT apply to Sanic in ASGI mode

# Overview of the changes

To share an object between worker processes, it MUST be assigned inside of the main_process_start listener.

All objects on shared_ctx will be available now within each worker process.

NOTE: Sanic will not stop you from registering an unsafe object, but may warn you. Be careful not to just add a regular list object, for example, and expect it to work. You should have an understanding of how to share state between processes.

Sanic can run any arbitrary process for you. It should be capable of being stopped by a SIGINT or SIGTERM OS signal.

These processes should be registered inside of the main_process_ready listener.

Sanic ships with an optional Inspector, which is a special process that allows for the CLI to inspect the running state of an application and issue commands. It currently will only work if the CLI is being run on the same machine as the Sanic instance. 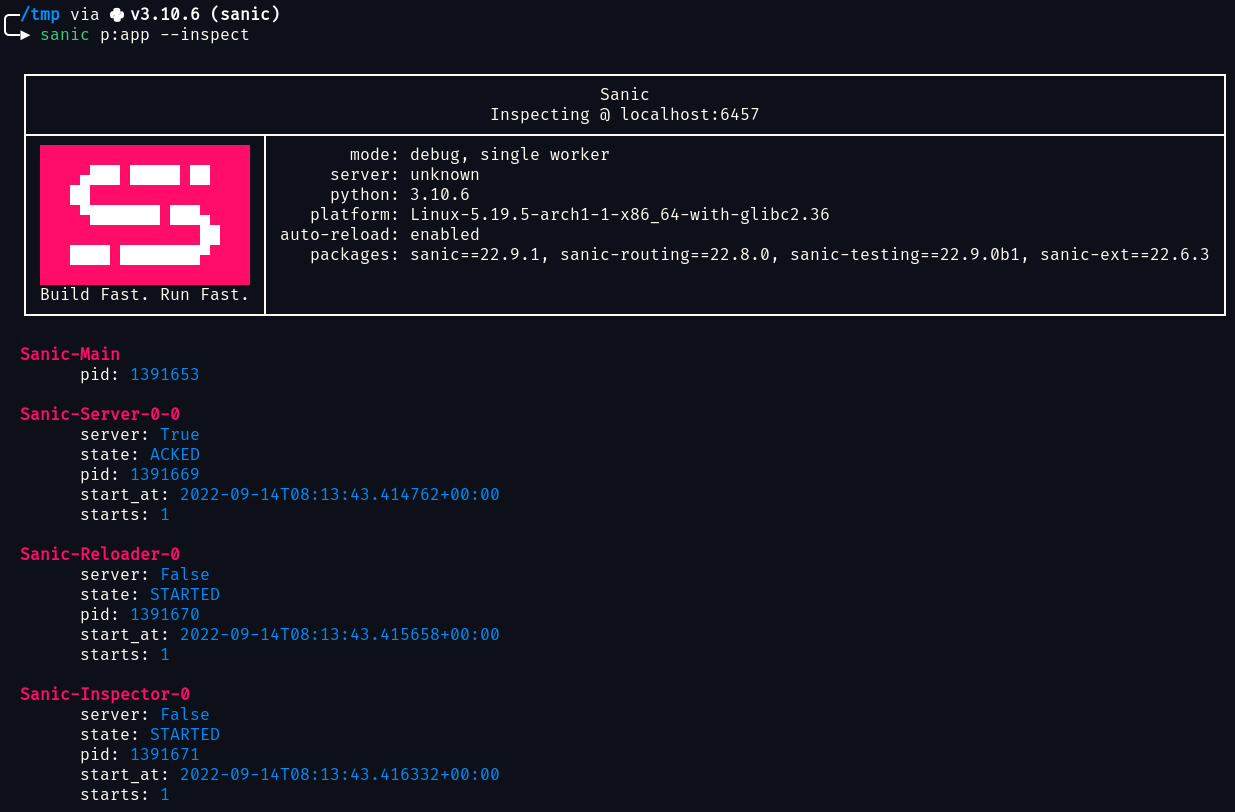 The new CLI commands are:

This is not enabled by default. In order to have it available, you must opt in:

*Note: Sanic Extensions provides a custom request class that will add a request counter to the server state.

You can access it as app.multiplexer, or more likely by its short alias app.m.

Because of the switch from fork to spawn, if you try running the server in the global scope you will receive an error. If you see something like this:

... then the change is simple. Make sure app.run is inside a block.

# Opting out of the new functionality

If you would like to run Sanic without the new process manager, you may easily use the legacy runners. Please note that support for them will be removed in the future. A date has not yet been set, but will likely be sometime in 2023.

To opt out of the new server and use the legacy, choose the appropriate method depending upon how you run Sanic:

Similarly, you can force Sanic to run in a single process. This however means there will not be any access to the auto-reloader.

Middleware is executed in an order based upon when it was defined. Request middleware are executed in sequence and response middleware in reverse. This could have an unfortunate impact if your ordering is strictly based upon import ordering with global variables for example.

A new addition is to break-out of the strict construct and allow a priority to be assigned to a middleware. The higher the number for a middleware definition, the earlier in the sequence it will be executed. This applies to both request and response middleware.

In the above example, even though low_priority is defined first, high_priority will run first.

Sanic has supported the ability to add a custom dumps function (opens new window) when instantiating an app. The same functionality has been extended to loads, which will be used when deserializing.

Rather than calling recv in a loop on a Websocket object, you can iterate on it in a for loop.

# Appropriately respond with 304 on static files

When serving a static file, the Sanic server can respond appropriately to a request with If-Modified-Since using a 304 response instead of resending a file.

Two new signals (opens new window) have been added that wrap the execution of a request handler.

The HTTP specification defines which HTTP methods are: safe, idempotent, and cacheable. New properties have been added that will respond with a boolean flag to help identify the request property based upon the method.

In prior version of Sanic, if a CancelledError was caught it could bubble up and cause the server to respond with a 503. This is not always the desired outcome, and it prevented the usage of that error in other circumstances. As a result, Sanic will now use a subclass of CancelledError called: RequestCancelled for this functionality. It likely should have little impact unless you were explicitly relying upon the old behavior.

For more details on the specifics of these properties, checkout the MDN docs (opens new window).

You can control the level of deprecation warnings from Sanic using standard library warning filter values (opens new window). Default is "once".

Thank you to everyone that participated in this release: 👏

If you enjoy the project, please consider contributing. Of course we love code contributions, but we also love contributions in any form. Consider writing some documentation, showing off use cases, joining conversations and making your voice known, and if you are able: financial contributions (opens new window).